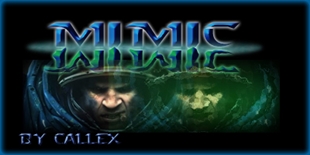 My entry for the sc2mapster AI competition!

Mimic actively records your build order and army composition as you play, which can then be saved into Mimic's memory for later use. Mimic will then try to emulate your playstyle in subsequent games!

Playing – By default, Mimic starts with no build or attack orders. If this is your first game against Mimic; build and expand as much as you please. Attack the existing enemy base, and type -save before defeating the opponent. Once the profile is saved, restart the game and Mimic will now know how to build and attack with your race! Alternatively, you can download the MimicAIData.sc2bank file and place it into the Starcraft II Beta\Banks folder. This contains 9 basic profiles to get you started.

Editing – You can change several basic settings within the AI Initialization trigger: 'Gather Rate' determines the mineral yield of the AI. Setting this to 2 will make the AI gather minerals twice as fast, and you can use this to alter the difficulty. Similarly, 'AI Omnipotence' can be toggled on to remove the scouting mechanic; this effectively allows the AI to see the entire map. If you want to choose which players are controlled by the AI, simply add them to the 'AI Players' player group.

Copying – Mimic can be copied into any melee map:

If anyone has an AI data bank they would like to upload for everyone else to try out, PM me!