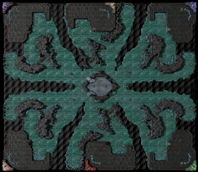 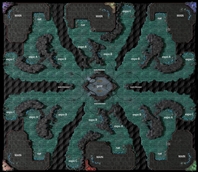 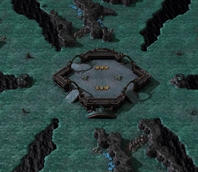 A large map for up to 6 players. Divided into six pieces of land converging in the middle, players have relatively safe bases but will have to cross the contested central area if they wish to reach their enemy. Inside the walls in the center lies high yield resources. Who will be the keeper of the gates?

Players start out near the edges of the map, and if they wish to expand they will have to move nearer the center. In the middle are gold resources, with an extra amount of minerals, so controlling the middle area is quite powerful and isn't just a short-term boost. Given the size of this map, it is very much intended for macro-play. Also, the fact that the natural expansion is so easily defended by a tight chokepoint, as well as your main base, helps give this map a macro flavor.

It might not translate too well through the screenshots here, but the main paths are very wide (wider than the screen in-game). This gives the possibility of large scale battles where no one will have trouble surrounding the enemy, or pulling off other such tactics.

The expansion pattern is also quite sophisticated in this map. Your second expansion is quite easily defended, along with your natural. As long as the enemy doesn't destroy the protecting rocks, it is very safe. Additionally, there is one far away expansion that is quite easily defended, as well as a closer expansion that is very exposed. So, you can either choose to expand in direction towards the middle area and your enemy, or away and into a more defensive position.

On the images here, the colors are completely different than what it's really like. It looks much better in reality, so I suggest you download it and try for yourself.