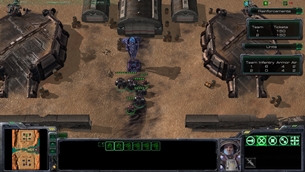 Note: This map is already uploaded to the Battle.net publishing feature and further updates will be uploaded as well, to play it will other people, create a custom game in SC2 and load the map. Currently, the person you play against is on your team but will still be your enemy.

This is a Starcraft Multiplayer Map that is Based on Battlefield. Spawn Infantry, Capture and hold control points to reduce team tickets/reinforcements. Also Killing enemy units will deplete your foes tickets.

Any Feedback  and suggestions on balancing or ideas to make it more fun please leave a post.

– Select Controlled Flag and Use "A" to spawn marauders and "M" to spawn marines, infantry units are capped at 25

– Tanks and banshees will re-spawn at main base after destroyed, they don't factor into infanty

– Tanks and infantry near a flag will cap it, air units cannot capture points

* Make Classic Mode
– Making a classic melee version where standard play is used (building up a base, harvesting, etc.)
– Make players main structures built only in certain areas and indestructible so that main objective is to still capture control points and not destroy each others' bases
– Make all Races playable in this version because with standard play it should be pretty balanced