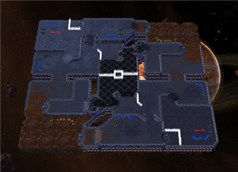 This abandoned mine is once more being battled on for the rich resources it posseses. The central platform is critical to control; however, there are many routes blocked by old mining debris that could cirumvent the center.

This map is a 2 player map with 3 expansions for each player, and 1 of those 3 expansions is a gold expansion with rich gas. The trade off is that the rich resource nodes are easily harassed and attacked due to the long distance between them and the cliffs overlooking them. There are many paths around the map, and more can be created by destroying debris barriers. I have tried to make the map balanced for all races, though the cliffs may be advantageous for Terran due to the ability to set up Siege tanks on cliffs. However, the main pathway is fairly wide open and has many paths that go through it, so Zerg players will be able to set up flanks and gain surrounds if their opponents aren't careful.