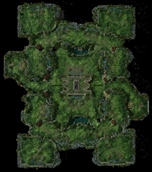 Large 2v2 melee map.  I mixed textures from different tile sets to bring the jungle to a space platform.  Designed to be balanced for competitive multiplayer.

Comments and criticisms are welcomed.

This was my first official map release.
Enjoy and thanks!

-Opened up center cliff area of the map to allow more attack paths across the map.
-Changed position of watch towers slightly to accommodate changes.

v0.91
-Fixed issue were units could path up the side cliff face of certain ramps.
-Fixed issue where destructable rocks were being bypassed entirely.