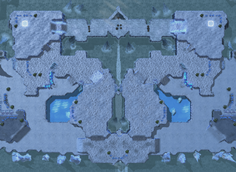 This map got a lot of features and it's pretty cool if I can say so myself.

I also did a LE version with no "extra features" on.

Is a 1v1 melee map. Where the player have to move in a Boomerang shape to attack in the beginning.

The player has a decently easy defended expansion, a ramp less but a small choke. Outside this choke a larger area is, which leads to 1 ramp that takes the player to the large middle part of the map or a down to a smaller path way which lead to the third and the fourth.

The expansion also has a backdoor entrance which is blocked off by Ice Rocks. Behind this Ice is a curtain hidden secret area where player can hide Barracks etc.

This path also leads to the third, so the user can forcefully open the backdoor path to make it easier to defend the third.

The third, is at start harder to mine at. As the mineral line is blocked off by mineral shields! This shields will eventually die out from time. But, the player at most times will have to destroy them to use the expansion.

There is a large open area close to in between the third and the fourth, which overall is a very hard expand to defend. The fifth is in the middle of the map close to a pathway that can be opened by destroying 2 Ice Rocks.

In between these Ice Rocks a Xel’Naga Tower is locked which the units cannot reach before the Ice rocks are destroyed.

There is a last expansion in the middle down path which connect the side paths this path also leads down to the 3 and the 4, creating many several attack paths.

Lastly on the map its a huge broad ledge connecting the main bases.

This ledge is not blocked off by anything like Ice etc.

Instead this ledge is guarded of by several Lurkers! The user can micro and lose a low number of units to pass this ledge and attack the opponent.