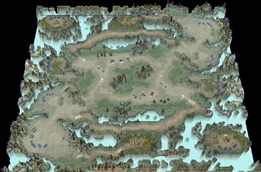 "Where everything has died and left behind only their remains…"
CApital Wasteland features a battleground on the planet of Xil where nothing yet has survived.
Two players enter the battlefields at a time settling a dispute of which one is the best.
Each player starts out in the corner of the map and has the natural in the extended part of their resepctive base location.
The third base can be found either through a path in the back of the Main or just out the natural expansions reach.
Two islands in the opposite corners of the map house the last expansion location and is unreachable by ground unit. However before getting over-eager… the islands are covered by a rockformation, blocking the mineral-site.

The map is fairly large and apart from the main pathway acros the middel of the field, there's two separate sneakroutes than lead from the players natural to the enemies third.
These sneakroutes also come into play when taking Xel'Naga towers. Chosing between an offensive stance or a defensive stance can make a difference in wether the enemy might spot your approach.

I hope that for a 1v1 experience this tend-to-macro-map will provide a good amount of fun playing!