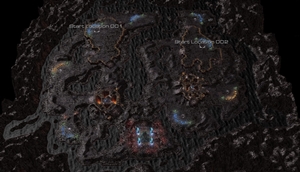 In the midst of battle you see a strange black glowning light moving a few feet of you around your soldiers. You rush over towards the light as your soldiers do not seem to see it. Once you get close enough the light suddenly starts growing in size and engulfs you. Darkness… only darkness lays before you… when you start hearing a gentle voice inside your head. This voice is no lowder than a whisper. "At midnight go to one of the planets poles. Once you are there ascende until you see a blue star in the emptyness of space and go towards it.Recover the relic." You suddenly wake up back on the battlefield…you have led your army to victory but…you can't stop thinking about the strange voice in your head.

The blue star vanished soon after you started moving towards it, but you have a feeling that you are headed in the right direction.

After days of travel, with your supplies almost gone you reach an odd dark planet. While scaning the surface of the planet for any life forms you are suddenly hit by a green beem from the surface of the planet. As you start crashing down, just before you are hit in the head by something and lose your conscience you see on your sensors that a nearby ship has been hit aswell.

You wake up on the surface of the planet. One of your soldiers comes to you and reports that the other ship that crashed is carrying hostile life forms and that both ships were shot down by an energy beem from a Xel'naga temple. You immidietly start giving commands to nearby workers and soldiers and establish a base as you prepare for a battle with your "neighbours" for the capture of the Xel'naga temple.

Recommended program to play the map: http://sc2.nibbits.com/assets/starcrack-allin1/
Don't forget to visit us at http://charlemagne.prophpbb.com/