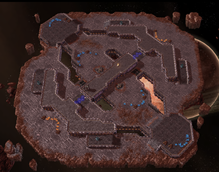 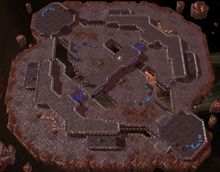 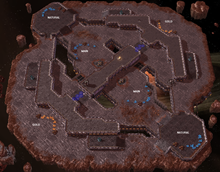 A chilling battle upon a space colony that's hurdling toward a planet.

The initial rush distance is extremely small, making the early game on this map very interesting. However, unlike many maps which bring your bases closer as the game progresses, Colony Drop brings you further from your enemy.

You can destroy the colony's Fusion Core to activate the emergency shutters, making the rush distance between bases much longer, but you might want to hold off on that and deal some early damage to your enemy while you can.