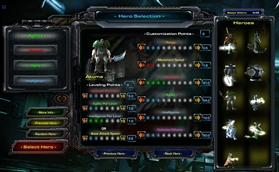 A Warcraft 3 style hero arena with a casual pace and more focus on strategy than on quick reactions. Players select a hero base, customize stat gains, select abilities which can be customized as they level. Kill creeps which spawn in regions around the field for experience and gold. Kill bosses in side regions for points and additional currency. Periodically compete with an opposing team for additional points. Victory is achieved by reaching a point count.

Once all players have selected their heroes, or a timer expires, gates open, allowing players to leave their base. Shops are closed, boss regions are closed, and the only thing players can do is kill monsters, or each other.

Initially, only PvP modes are available. Even team PvP, or the best player from each team. Kills give points, and the winning team gains additional points. As the game progresses, boss mode and survival mode become options. Both modes are pvm, and teams compete to kill a boss first, or survive the longest.

As abilities are leveled, players are given multiple tiers of various upgrade options for their abilities. What may start as a single target spell, may become a life stealing aoe ability. Upgrade are a way to make up for your weaknesses or to counter an opponents strengths.

At the start, players pick their stat gains pet level, and their starting stats. Base stats cannot be altered in any other way. They also increase various stats by a %, Which makes each hero class a little more unique. Typically, strength has a lot of life, which is strong to spells, agility is high DPS over time, and armor. Agility kills strength, but dies to int. None of this is pre decided, and heroes gain all of the stats. Auto stats can be set up to automatically apply stat points purchased.

Items come in tiers which unlock over time, and gain variety and complexity over time. Items account for about ⅓ of your total strengh, so items are required, but you get a lot of ways to play it. Weapons are the only specific item type, and only one can be used. All other items fit into any slot.

Many games have issues with snowballing. In custom hero arena, death is not penalized, and winners are rarely given rewards over losers, since earning points leads to victory, that is reward enough.

Experience is shared between team members, so teamwork is important. Since game pace is also based on the average level, it prevents new players from falling behind, or pros to get so far ahead they make their allies obsolete.

Some skills are PvP geared, while others are pvm geared. A pvm based hero will likely out level a PvP based hero, but when it comes to fighting, the PvP hero may still win, despite what would be a disadvantage on paper.

A short tutorial explains the game basics, so a first time player knows what they are building a hero for. New players are then prompted to use a premade hero, where a hero, skills, and auto stats are set up already, allowing new players to focus on gameplay.

The APM requirement of the game is quite low. Most players have 15-25, depending on the build. Dota players have 40+, but lose. Winning is based a lot more on strategic soft countering than overpowering an opponent or skillshots.

AI has recently been made, and is pretty difficult to play against. AI can be accessed through the mode selection at the start of the game, and cannot be removed once added. AI is very helpful to noobs, as it will carry them through the game; and helpful for pros to test against.