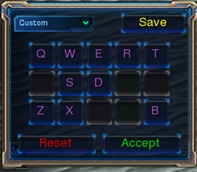 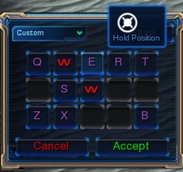 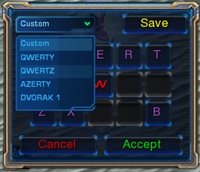 Use pre-defined dialog box to edit hotkeys, you can either specify a set of them, or input Unit ID to automatically generate it.

Hotkey thru UNIT – Use this to open the editing box with command buttons taken from units command card.

Hotkey Setup thruButtons – Use this to open the editing box with input Buttons.

Parameters: most of them same as thru UNIT, with addition of 15 button IDs to manually input. They're ordered as on command card.

Load Set – Loads previously saved Set of hotkeys, to buttons they were assigned to when saved. Note, it may interfere if player has edit box currently open.

Save Hotkeys to Bank – Forces currently selected hotkeys to be saved for input player. Function won't fire if Set == 0.

Hide/Show Hotkey Box – because I've set library to be Internal, use this to show/hide Editing Dialog. (Box automatically shows up when using setup functions thru unit or buttons)

Change Hotkey Box Size and Position – coz i slack i forgot to rename, it only changes position. Input X,Y and anchor.

Important note: Using this library requires certain Game Text to be input in your map, or else it won't be able to function. Either manually input, or copy/paste those values to localehere/LocalizedData/Hotkeys.txt inside your map .MPQ. Attached Hotkeys.txt file contains those values.