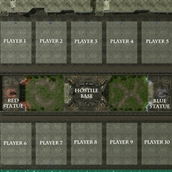 </center>
Defend the statue is a recreation of the Warcraft 3 map called Defend the Lich king.
This map is currently only available in the EU.
Current Version: V2.8

Defend the Statue is a map for 10 players, 2 teams of 5 players each.
The first 5 players will be in the top team (Red), the other 5 will be in the bottom team (Blue).
At the start players get to choose the supply cap and have the choise between 50, 100, 150 and 200.
The after the voting the supply cap will be set to the average of the votes (min 50 even if people don't vote).
Once all people have voted and the intro has ended, all players get their base and 6 builders at their building zone.
Zerg will start with a small boost of creep and the protoss' nexus has an energy field.
Players have to create buildings and train units (both are free), and gather minerals for upgrades and defensive structures (bunkers, pothon cannons,..).
Players can move their units out of their building zones to teleport them to the center, where they will automaticly run to the opposite statue, attacking all enemy units in their way.
Units in the center can also be controlled by the player if they wish to do so by selecting and moving them around.
There is a hostile base in between both statues to prevent an early rush and guard more minerals. This base uses a few upgrades, so be prepared.

* The Engineering Bay, Evolution Chamber and Forge can be used to drop off minerals
* The Nydus Worm, Mass Recall (Mothership) and Scanner Sweep (Orbital Command) are disabled.
* …

There are a few things that I plan on adding in future updates:
* A rematch system at the end of the game
Players will be able to vote if they want to have a rematch or not, those who chose not to, will leave the game.
If there are an even amount of people that want to have a rematch, new team will be made and the game will be reset.

* Fix Nydus worms and Mass Recall
Currently units called to the center uning the nydus worm of the mothership's recall will to teleported their statue instead of the correct location.

* Allowing smaller teams (?)
This is currently still unconfirmed but I believe that if only 2 players join the game, they will be on the same team, no matter what.
The map will require some rework to fix this and allow match-ups such as 1v1, 2v2, …