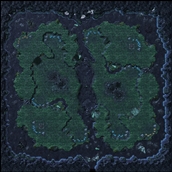 The map is, as far as playable terrain goes, totally symmetrical. Players start cross-spawn, in the top right and bottom left corners (2 & 8). Each has a natural that is quite easily defended which opens out in to the centre of the map. A second expansion lies on the low ground sheltered by the main. In the other two corners of the map (10 & 4) one can find high yield mineral patches, which can be attacked from multiple fronts and thus are quite hard to defend. There is also a third expansion on the high ground behind the high yield, slightly closer to the main.

Destructible rocks are located on a small choke near the natural, to allow (delayed) access to the 3rd expansion (and surrounding high ground – which can be used by terran to siege your natural to an extent). There are also rocks at the "back door" of each main, to dissuade turtling and encourage tactical diversity.

The large central plateau is broken up by two structures housing watchtowers and an ominous tower in the centre. Centre "Choke"
– There was a lot of initial confusion regarding the pathing in the centre of the map. This image highlights how open the centre actually is, with the majority of it being passable by ground units. The only areas in the centre not passable are highlighted in red. SC2 Map Analyser –
– NOTE: There are a few discrepancies in these pictures (apparently one of the high yields is "more open" than the other – despite the map being totally symmetrical. As far as I can tell, these are due to errors with the application itself and not the map but I am choosing to include them anyway. Feedback –
– Specifically looking for feedback on the following (though all is welcome!)

Thank you for your time and comments!