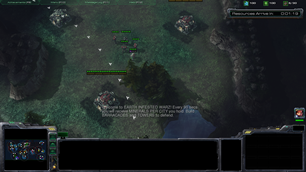 The game of Risk meets Zombie Rampage meets Tower Defense. 10 human nations that have the option to unally and kill each other or fight together against the 2 infested (zombie) players. Each terran unit that dies turns into an infested. Each city that is greatly damage turns into an infested city. It is a Risk style map because controlling cities gives you resources after a certain time period. It is a zombie game because you build towers and barracades to defend against the infested. (Zombies) A bit of a tower defense game.