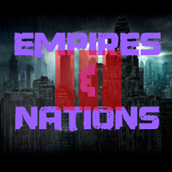 Humanity finally did it.
They began the war to end all wars… in the year of 2064, the global powers entered into a war which quickly escalated, forcing the East Asian Federation to use their nuclear weapons.
There were 9 billion people. They believe that figure to be as low as 50 million, even now in 2100. Since then, local governments have banded together and managed to form their own nations, gradually rebuilding civilisation.
Your nation recognises this region as one of the few areas containing the resources we need, and has sent you to secure it. However, our satellites show that you are not alone.

Right now this is just an alpha, so don't expect much, I only started it the other day… but it is published on EU, for testing.