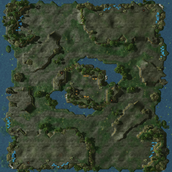 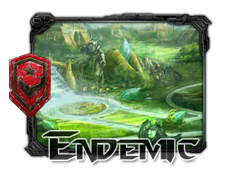 Set on the world of Endemic where the war between the three races has once again ignited. There was a time when a lush forest swept across the entirety of the planet but as war rages on, the land has started to become scarred with the wounds of conflict.

Endemic has been built for 1v1 action and houses starting points to the north and south. Each starting point has the standard eight mineral nodes and two Vespene Geysers.

A natural expansion consisting of another eight mineral nodes and two Vespene Geysers can be found relatively close to the starting points, to the west of the southern and east of the northern points.

Towards the east of the southern starting point and west of the northern point, a ramp from the main starting point leads the way to the expansion zone but the player will have to decide whether destroying the blockade at the back entrance of their base is worth the risk. Alternatively the player might choose to send his or hers forces down their main entrance ramp, leaving the back door still protected but with a time penalty.

A fourth mineral field is located outside the main starting regions.

In the centre of the map is a high yield expansion area with eight Rich Mineral Fields and two Rich Vespene Geysers. Destructible rocks act as a blockade for the two entrances into this area, of which can be found in the north west and south east.

My first venture into mapping with Starcraft II so would gladly take any criticism and feedback from any haggard war veterans, cheers and thanks for looking 🙂