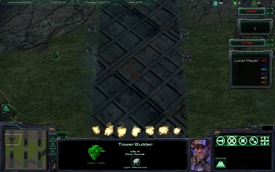 Evolution Defence is a Tower defence map for up to 6 players. It´s a survivor map, the last player alive wins, but you can still play it alone.
The main difference between this map and other tower defence maps is that when you have killed 30 of the 40 creeps, the last 10 will become invulnerable. These 10 creeps will copy themselves until they are 40 again, and then move back when the next level starts. About 10 % of the copies will also have random mutations. Mutations can occur in different ways: their hitpoints, energy and shield can increase, their unit-type can change and they can even learn abilities. Copies of mutated creeps will of course have the same properties.
I wanted to create a map where the creeps adjust to the towers you build. In this map they do, but not entirely. Creeps that start walking late have a much bigger chance to survive than the creeps at the front. So it´s still a bit random what units you get to kill.
This map is on battlenet in Europe under the name Evolution Defence Z. I would like to know what you think about it.