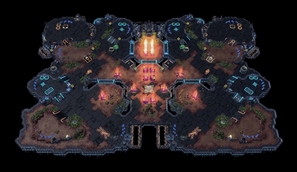 Experimental is inspired and based on the Blizzard map known as "Habitation Station"
I liked the idea of an installation with cultivated swamp/jungle setting used for experimentation purposes.
Habitation Station it that way seems like a research station for the Protoss.

I wanted to translate this idea into a more dark and sinister style.
Idea behind Experimental Devide is a Dominion controlled facility somewhere in space where genetic research is perormed on a large scale.
The facility is even equipped with a specific nuclear platform that would be used in a catastrophic event or containment breach.

As it turns out however, the facility dropped off the radar and no contact was ever established since then.
Its fate, and that of all occupants (Human or otherwise) is only speculation or guessing.

I hope people will enjoy this map.
Credits to Experimental Devide: BloodRayne (Me)
Credits for the idea and original map its based on: Blizzard