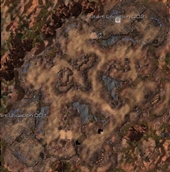 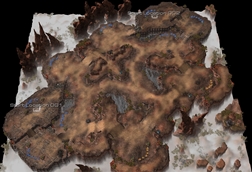 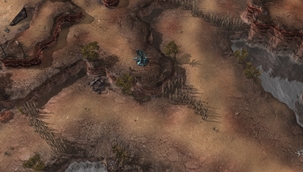 This was my second official map release.  I used a desert/wasteland setting for this map and focused on using the awesome texture palette to it's maximum potential as well as making a very playable and balanced map.

You'll notice the naturals are fairly wide open and there are numerous attack paths across the map, with one major one through the middle which a watch tower overlooks.  My intent was to make the attack paths long enough so early cheese isn't entirely viable, and I made a third "natural" connected to the main through destructable rocks so that one can still play defensively if they so choose; but a hardcore macro-turtle battle probably will be a difficult gameplan because of the wide choke into the naturals and the numerous attack paths across the map.

Anyway, thanks and enjoy!

-Fixed issue where workers were mining gas from the opposite side of the geyser.
-Fixed ramp glitching issues.
-Modified fog properties of the map.
-Map the top main base slightly bigger.

-Updated some terrain, changed the fog properties of the map as well.
-Made the map size smaller, as it had a lot of unneeded extra space.

-Increased the size of the main bases.

-Switched the player spawn locations to the top cliff adjacent to the old mains.
-Removed destructible rocks at the gold expos.
-Moved the mineral lines farther out to allow for buildings behind them.

-Reduced the total size of unused area in the map.
-Redid some texture/doodad work.