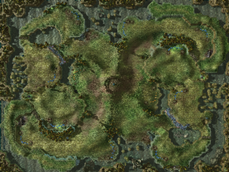 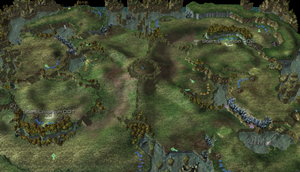 After many months I finally decided to come back to map making.

My primary goal was to make a macro oriented map with the possibility for early aggression. To do this, I positioned the natural and third expos in protected positions. However, the rush distance is fairly average relative to other blizzard maps (around 148). So early aggression is still a possibility – your opponent just has an easier time defending his natural. The map is large and has a lot of space for your sim city.

I wanted to make a map with a rolling plains feel, as such I created an open middle area with hills (which only serve the aesthetic properties of the map). One watchtower is positioned on top of the central hill, surrounded by LOS blockers, and as such, controlling the primary hill will be important.

I also wanted to give opportunities for players to avoid the middle and by creating backdoor paths, blocked by rocks, into the natural expansions. Watchtowers can also be taken to keep an eye on them, but given the large nature of the map and the importance of maintaining control in the middle, it will be important to have some mobility in your army – just in case you see a bunch of speedlings breaking down you backdoor rocks.

I have tested this map with a friend and we've had a lot of fun and interesting matches on it. Hope you all enjoy 🙂