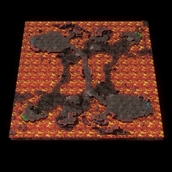 A trigger example map to show people how to create a complex, but user-friendly trigger system that controls the map's lava, sends audible warnings as it rises/falls, updates the current lava height in triggers so damage is applied to whoever touches it visually, aswell as having 3 levels of depth of which each deals more damage. Everything is controlled via variables, and all variables are commented-on, so this should be easy to understand for mappers that want to include this feature in their own maps.
NOTE: V1.3 has the variables for damage replaced with actual damage effects from the data editor, which enables death animations depending on the type of liquid. Fire and Acid work for all Zerg and some terran infantry units in the beta, but i guess they'll add more effects in the retail game (Frozen looks interesting, too… water replaced with cold mist fog would make up for epicness)

Please test it and let me know what you think, or ask questions. I'll be happy to answer.