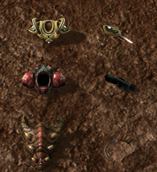 Item drops, armor and weapon for each race 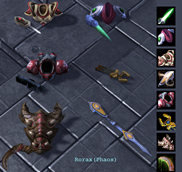 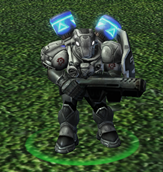 It's finally here! omg tell your mothers, and your dogs. It's fantastic.
There was waaaaaaay to many models for me to do a screenshot of the whole lot (time investment into making them all actors) so here is a au'sum list in the qoute below detailing whats in this puppy. a total of 79 entries!

This time around I have fixed some of the issues that were abundant with the last lot, I have stripped the parts of animations that can't be used by the object. I have also added attachment points.

a word on the attachment point format.
sOPAttachWeapon type points to muzzles and launch areas.
sOPAttachHardpoint points to areas where one would hold or likely mount the object
sOPAttachOverhead points to that one would likely display a overhead icon 😛 this is prudent in pointing out on weapons as the "over head" is often to the left. Which would be the most likely side UP if you choose to make a version of the item that lays on the ground.

This entry includes ONLY Terran objects. There are no Protoss or Zerg objects in this pack, those are coming soon.

The Kit project exists to provide the mapping community with various
models and icons to use primarily as item drops and attachments,
but essentially in anyway you can imagine.
while each kit will expand on the content of each previous kit.

Kit1 a generic weapon and armor for each race.

Kit2 has just been released and contained the content from Kit1
+plus four other models and icons to match the content of the kit.

The plan for future kits are as follows.

KitT: The terran Kit, a complete butchering of all the terran units for
parts and I will be making Icons to accompany.

KitP: The protoss Kit, same as above but protoss go under the knife.

KitZ: you guessed it. Zerg.

After these there, no doubt huge updates will be in order for all three
due to the games release.

After these three are complete I will be working on providing a kit of
my own models and icons.