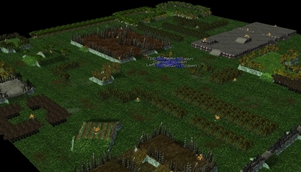 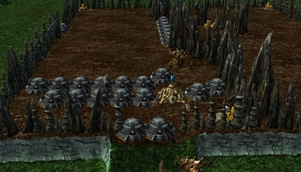 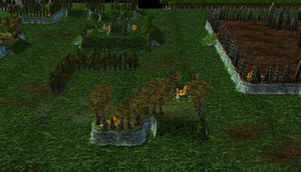 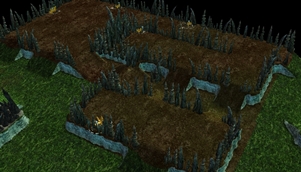 This is a remake of the "classic" warcraft 3 map Kodo Tag.

This is a video of me playing single player Multiplayer gameplay will vary because of two key concepts, team work, and more kodos. It is okay to skip to like the last minute, that is where you see how to die (STOP MOVIN!)

At the start of the game, you are spawned at the all-purpose jail and kodo spawner (will elaborate later on). From here, your only intentions should be run and maze as fast and as far away as you can. The 'slowest' player will gain most of the kodo aggro. This can be lost in various ways:

From here the game is self explanatory, try to survive through mazing, running, and saving allies that have been SLAIN. In the original game, many players confused this game with those OTHER tag games, the ones with player vs player.

This is a fully AI vs Player game. ==== Building bases will get you dead! ==== Mazes are the way to survival, the kind you would make in a mazing td. To continue using this example. If you build walls, utterly surronding yourself, the kodos will attack the walls, and enact their vengance. If you build a maze of sorts, the kodos will chase you through the maze, without taking their anger out on your walls.

Soon to be Added

Builder Upgrades
More wall variations
Mining! (this is current in it, however, with out any upgrades, completely useless, so i "hid" it)
Lose on death Buffs! (To replace items)
Different, unique builders.

What i need (Pm if interested)
A working Kodo model, with animation and what not
Various worker models, starting with the basic human, orc, undead, and night elf builders
If anyone wants to pretty up my map, that would be nice

Working on the finishing touches, of making this map playable! Hopeful publish by tonight