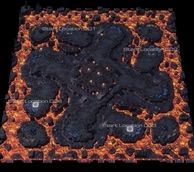 Establish control and defend the high ground, you're going to need it! Two to four players battle for control of higher ground as lava surges begin cutting them off from much needed minerals and gas, ultimately engulfing them in molten flames. Lastman's Refuge is a "last man on the hill" style map where the player who solely controls the central "hill" at the end of the game timer wins. If more then one player has units in the contested region at the end of the game timer, the match goes into sudden death overtime, where the first player to achieve sole control over the "hill" wins the match. Additionally, lava surges up to the first level of ground every 60 seconds as well as permanently covering that area when the game timer reaches 5 minutes left. At 1 minute left on the game timer, the lava surges again to the second level, destroying all units and structures on level 2, leaving little safe ground left from which to launch your attacks.