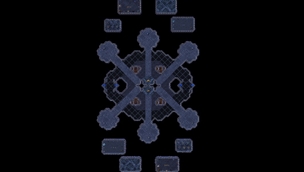 Marine Swarm is a 6-player arena-style map. The goal is to defeat the opposing team by destroying the Bunkers located in their respective bases. Each round (25 seconds long), the players will receive Marine reinforcements and resources. Each player also chooses a Hero Unit to assist. Aside from being powerful in combat and possessing Special Abilities, Hero Units are also used to capture important regions “King-of-the-Hill” style. Each region a player owns will add an extra Mineral bonus at the end of each round. Minerals can be exchanged for Mercenaries and Upgrades.

There are 12 different Heroes, and each Hero can be upgraded one time in order to generally boost their stats and Abilities. *Note, these Heroes are not all-powerful, and are certainly not the focus of the game. They can be taken down fairly quickly if the opponent does not micro them effectively, and are primarily support units.* Among the Heroes are the Zergling, who can lay down Proximity Mines, the Roach, who can create a beacon that attracts enemy units in its radius, the Ghost, who can Cloak and Mass Recall friendly units, the Firebat, who can create Flame-spewing turrets, and the Queen, who can create a Missile that can be guided in any way the user wishes before it explodes, dealing damage to anything caught along its path.

There are 15 different Mercenaries available for purchase. Some of these units include the Micro-able Vulture, the High Templar, the Infestor, the Diamondback, the Colossus, and the Probe. The Probe has the unique Ability to create Nexus Bombs, which can detonate on command. When a player has begun construction on a Nexus, a warning is issued to all the other players, and the enormous radius of the explosion’s range is shown on the map.