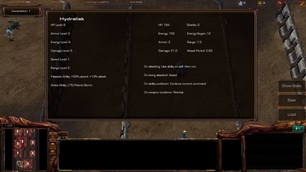 This map starts out with 32 different randomly generated units, each with their own randomly generated stats, abilities, and behaviors. The best units have their genes swapped with another sucessful unit, and the resulting hybrid replaces one of the poorer performing units. Add the occasional random mutation and voila EVOLUTION!

Replace player 2 with a computer to evolve your own units or… Join up with other players to save/load/trade traits, and compete for the best the unit with the community