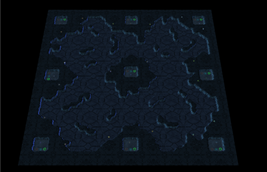 It's very simple.  You have 3 beacons.  They are based off of the three races.  Move your SCV there and you will get a random unit based on that race.  Kill the other units people randomly spawned, think ahead!  Winner is the most kills after 15 minutes.

– Increased the size of the SCV box to prevent accidental choices.
– Increased the game's Time Limit to 20 Game Minutes.
– Forced Alliances – Everyone is an enemy against everyone else. (Need to test to see if it is locked — Probably is).
– Changed Kill System to a Kill Point system.  Every spawn will give a total of 8 points and 8 Minerals to the killer should he get all of the spawn.  Zealots are the only exception giving 9 of both total.
– Added Random Chance for Medics and Science Vessels for all race choices.
– Changed the Spawn locations to a random choice between 30 different spots.  This will prevent camping.  Medics and Science Vessels however will spawn at the old location so that a defenseless unit does not get spawned in the middle of a battleground.
– Removed Yamato Cannon (Battlecruiser) and 250mm Strike (Thor).  They are just too powerful for this type of game.
– Gave Marauders the ability to attack air and increased their damage by 5 (10 more vs. Mechanical)
– Gave Firebats the ability to attack air and increased their damage to 12 (24 vs. Light).
– Ghosts no longer have the Sniper Round ability and instead do 50 damage to all Biological Units.  I believe this will make them a whole lot more useful.