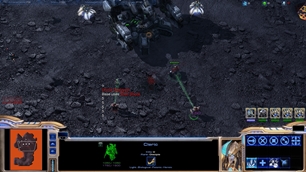 Custom RPG element Boss fight in StarCraft 2. The boss consists of 3 phases; in which he gains additional attacks during the second phase, and attacks faster during the third phase. The boss consists of two main parts. The Core and the Base. Both parts have to be destroyed within 45 seconds of each other. Two Generators Buff the boss with a shield that caps max damage and increases the attack rate of the two parts, respectively. In addition, Dropships fly in and drop off adds to make the fight more insane. And it has an Enrage timer of 10 minutes.

There are 4 classes of units currently in the map: Cleric, Marauder, Soldier, Warrior. Warrior and Marauder are capable of tanking the boss. As I use a threat system that identifies the damage that a unit has done to the boss and reacts accordingly. The Base needs to be tanked from a range, because it can only fire from a distance. Next version should include another Ranged DPS class and Melee DPS class units.

Currently in Alpha stage; A few kinks to work out on the threat system, 2 classes need to be added. And a system for Autonomy by units not currently selected. (i.e. they will avoid damage if possible and attack priority targets)