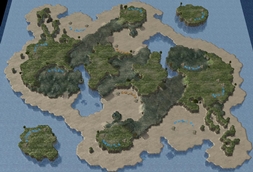 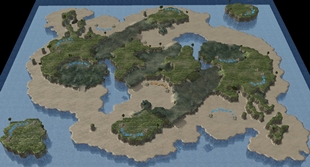 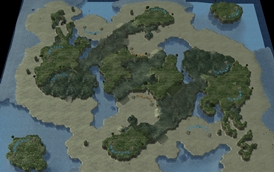 My initial idea for this map was to create a lifelike island for 1v1s with the feeling that you and your enemy are stranded somewhere in the ocean and there is nobody coming to help you. You are forced to fight for dominance of the island or die.

I wanted to make many attack paths as well as lots of spread out, challenging to defend expansions to hopefully create a lot of diversity in the games you play on this map. For example, the high ground in the middle of the map has skinnier ramps than the ramps leading through the high yield beach expansions, so if a direct push were too difficult, you could take the long way around or attack the natural. I split the entrances to the mains and naturals, but there are Xel'Naga towers useful for watching backdoor attacks.

I also tried to make the map reaper/colossus and proxy friendly, with the beach extending all the way around the map and some low cliff ledges at the back of the mains.

Still a work in progress, making small tweaks in a lot of areas.