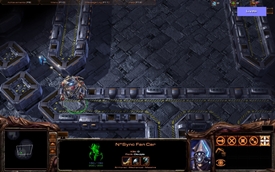 This map is a re-make of an old Starcraft map in concept, though the map itself is new. There are two primary goals of this game, and which one becomes yours depends on how the game starts off. The game starts each player off with a single Marine. After five or so seconds one of those players will also gain a Dark Templar. The objective for the player with the Dark Templar is to kill everyone else playing in under fifteen minutes while (hopefully) keeping his identity a secret. If six or more (with a max of eight players) people are playing, a second killer will also be chosen, with the same goal. If you are one of the "lucky" many to not be chosen as to be a Killer, your goal is to survive for fifteen minutes. If you manage that, you are given a chance to choose who the killer is. Choose right and you get five minutes to reverse the role and kill the killer. Choose wrong and you will lose. Throughout the map there are locations that will put you on elevated platforms that will give you a better vantage point and a better chance of survival.