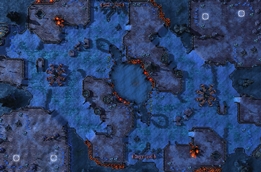 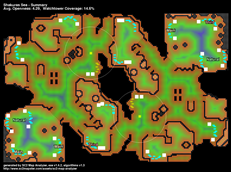 This map plays on the Planet Shakuras. It Plays in a Sea area with large areas under water. Only small parts of the Map are Islands but dont panic, Units can walk under the Water to a certain level.

The Map is ment to be played as 2vs2 Matchup. Two parties start together on one Island and the Enemy is starting in the Other Corner of the Map.

Overview from the Editor with Starting Points:

Analyzed with the Cool Analyzer from sc2mapster.