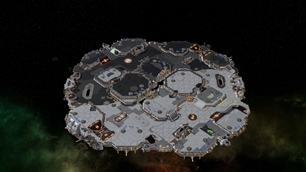 The idea for this was to create something people didn't attempt, because of gameplay balance reasons: A map where, air-wise, players are virtually next-door, with the design inspired on the most well-known symbol of balance, in Chinese philosophy. In demonstration of this balance, while it'd be possible to quickly attack by air, it'd be sort of complicated by ground, with no direct route and instead being forced to circumvent all around.

This is about the first true 1v1 map I've ever designed, though I've made a lot of research and observation of several ladder maps, including those made at TeamLiquid. I took into consideration rush distances, potential spots for Xel'Naga towers, destructible debris and towers and expansion sites. The only risk I'm taking, so to say, is so much the rush distance as well as the distance between the main base and natural, which might hurt Zerg players who don't prioritize creep connection.

A notable difference you'll immediately recognize is the virtually inexistent air rush distance between opponents, devoid of even an island expansion separating them, unlike Ulrena and Scrap Station. This requires players to already build expecting a mineral drop. However, despite looking that way, there's no short rush distance on the ground, only main base cliff accesses for Reaper scouts/Colossi that can cut travel time short. The Watchtowers are useful to both monitor movement and the potential gold expansions, as well as the vicinity bases. However, like Central Protocol, it has the problem of a distant, hard-to-secure natural, that will require Zerg to connect Creep Tumors for easier access. The third can be easily accessed by destroying the debris blocking the ramp, but it's also a potential back-door that can favor cheese if not scouted earlier. Players might find appropriate to station a Depot, Pylon or Overlord early. All outer expansions are open, except for one which you can block an entry/exit by collapsing a Cooling Tower.