The Battle for Ynoth IV 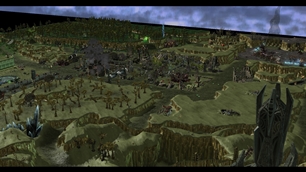 The Battle for Ynoth IV

Engage in a large-scale 4v4 cooperative battle to the finish! Pick your team, pick your role, and work together to overcome your enemy's defenses.

Each team is comprised of 1 General and 3 Commanders who must work together in order to fight for control of each of the 21 Waypoints spread on winding paths throughout the map. By controlling these Waypoints, players provide their team's General with resources with which to research and upgrade units and allow Troop units created by the General to follow the roads on which the Waypoints are placed.

Winning the battles to control as many Waypoints as possible provides a significant strategic advantage in the war to destroy the enemy's base.

As your team's General, you are the leader and coordinator of your team's forces. You are tasked with creating Troops, routing them throughout the map, researching and upgrading units, and disseminating intel to your teammates. The General is provided with vision of owned Waypoints and allied units in addition to alerts of activity across the map. By communicating this information to your team, you provide a significant tactical advantage that can turn the tide of battle.

As a Commander, you control an elite Squad of units led by a powerful Hero tasked with taking control of Waypoints and leading assaults on strategic enemy positions. Gain an advantage over enemy units leveling up, learning powerful new abilities, and collecting new weapons and armor. Your task is to provide resources with which your General can upgrade your units, improving the intel available to your General, and gaining additional powerful upgrades for your team. Use the intelligence provided by your General and work together with your fellow Commanders to dominate the battlefield.

As Raynor's Raiders, along with Valerian Mengsk and half the Dominion Fleet, began a daring assault on the Zerg hive world of Char, Kerrigan withdrew her forces from Terran and Protoss space in defense of her primary hive cluster. Kerrigan barely noticed when a group of Zerg on their way home were suddenly silenced from the hive mind.

Meanwhile, on Castanaar, the Hybrid Reaver released by Raynor and his forces had been plotting his escape from the research station. Sensing a swarm of Zerg passing nearby, he reached out to them, psionically severing their links to Kerrigan and establishing a link with himself. With his transport secured, the Hybrid turned his attention to a faint psionic power he sensed from far away – an artifact of terrible power, should it fall into the right hands.

Traveling to the fringe world of Ynoth took several days, but upon his arrival, the Hybrid wasted no time in attacking. Ynoth, a Protoss temple world, supported 5 moons, one of which contained a habitable atmosphere. Ynoth IV supported a small Terran outpost that had, thus far, avoided drawing the attention of the Protoss. Unbeknownst to the hapless Terrans, their colony sat atop the artifact the Hybrid was hellbent on obtaining.

The Hybrid's attack was quick and brutal. He and his Zerg forces killed many of the Terran colonists before the survivors managed to retreat. Then, when the Hybrid was about to claim his prize, the Protoss intervened. Zeratul, aware of the Hybrid's presence, had dispatched a small contingent of warriors to purge the moon of Zerg life. The Protoss warriors, disgusted by the Conclave's former indifference towards the Terrans, couldn't bring themselves to destroy the surviving colonists and instead focused their attack on the Hybrid's forward scouts. They forced the Hybrid's Zerg to retreat, but knew he would muster his forces and attack again.

There is no compromise. In a desperate attempt to save themselves, the Terran colonists and Protoss warriors have banded together as the Ynoth Alliance to destroy the Hybrid and his Zerg forces. The Hybrid, meanwhile, is gathering his strength, spawning his soldiers, and preparing his final assault…

I've done my best to fix all bugs in this (large) map before release, but there may be issues that arise in live testing. Below are known issues:

I wasn't able to completely debug all my planned features before release, but I still plan to implement them. Here are some: