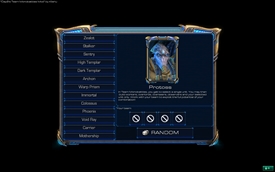 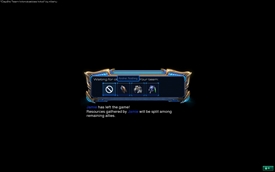 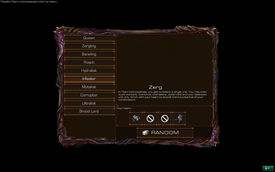 In response to a request over on the EU Custom Map forums, I present to you the Day9 Team Monobattles Mod! At the moment the mod is available for play on the Extinction and Arakan Citadel maps. This is a freely available mod so if you're a map author read below to see how you can download the mod for your map as well as look through how it was implemented.

Backstory & How to Play

A few weeks ago, Day9 challenged his viewership to play some 3v3 or 4v4 team games where each player announces a single unit just as the game starts. For the rest of the game, each player can only build the unit they selected as well as workers, overlords, overseers and observers. It's that simple! Go ahead and try to find the best combination of units for your team. Have fun!

Some other special rules:
Zerg cannot have more Queens than Hatcheries, including Hatcheries under construction, unless they have selected the Queen as their unit.
For certain selections that require a morphing unit (ie. Baneling, Brood Lord and Archon), the "pre-unit" (Zerglings, Corruptors and Templar respectively) cannot attack or use abilities.
There are no restriction on buildings or upgrades.
Computer players will not have any restrictions and will play normally.

If you want to spice it up even more, you can let the game randomly select a unit for you.

Play it on Battle.net

Get the Mod for your Map

If you're a map author and you would like to turn your map into a Team Monobattle: 1. Go to the Dependencies (File>Dependencies). 2. Click on "Add Other…" 3. Press on the Battle.net tab. 6. Select "Map/Mod Name" from the dropdown. 5. Search for "Team Monobattles". 6. Add the "Day9 Team Monobattles Mod".

That's it! Your map is now a Team Monobattle. The game is most fun when it is of the 3v3 or 4v4 variants.

Otherwise, you can even download the mod to look through it. Simply go to the Open Document dialog (File>Open) and follow the instructions above from step 3.