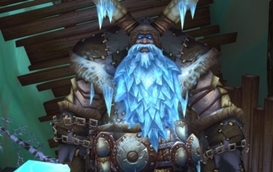 A regular melee map, 4v4, and it is themed after the Storm Peaks in WoW. There are minor differences from a melee map, such as certain "critters" that you may encounter on the map are hostile and will attack your units if you get to close. They can be easily dealt with, so they're more of a random annoyance than a hampering problem. They're not very common, just one here and there guarding rich expansions. In addition, the map's fog of war is dark. You cannot see unexplored areas at all. This is to simulate the ongoing blizzard on the map and its effect on your radar. It also makes expansions a bit of a treasure hunt to find (not a very hard one), which sort of adds to the fun.

There was a lot more decoration I wanted to incorperate, such as more Vry'kul arcitecture but I began to have severe texturing problems with certain imports that sort of went rabid and took out all my other custom decor, so I had to settle for a limited amount of custom doodads and the like.

If you wish to test this map, Simply download the map and its dependancies. Open the map, and re-attach the dependancies by browsing to where ever you saved them on your computer.

And now for cheesey back stories.

"This is ridiculous, what could possibly be so important on this back-water planet, our radar doesn't even work properly here! More Xel'naga wild goose chases…I can't believe it. We don't even know if those signatures belong to Xel'naga constructions, could just be a bunch of magnetic rock or something. And just what was that deep yelling in the distance? It was almost indistinguishable from the constant thunder. Don't even get me started on the constant thunder… All I know is, the sooner we pack up and get off of this god-forsaken glacier the better. Hell has truely frozen over…"