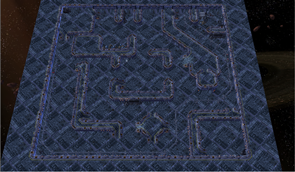 Remake of Brood War map: The Thing in Space
Goals:
The Thing – Tries to take down all the scientists
Scientists – Kill The thing
Units:
The Thing – Changeling with 50 health and 5 attack with very fast attack speed. Moves a little faster than scientists and can take 1 down, but not 2. Has the ability to disguise as a scientist. Player is randomly chosen as The Thing at beginning of the game
Scientists – Ghost with 100 health and 10 attack. Has limited sight radius and no abilities. Gun has 10 shots, can reload at ammo station near top left corner of map. When scientist is killed by The Thing, he turns into The Thing.
Scientist(The Thing) – Same stats as Scientist. Has ability to transform back into The Thing. Also has ability Inject Leech. Inject Leech has 1 range and does 10 damage over 10 seconds with 10 second cooldown. Can be used on all units. Useful for scaring scientists…. use it on another player to scare them, or use it on yourself and blame someone else.
All players are the same color to make it harder to distinguish who is who.
Will add more features in the future. Please email suggestions, bugs, or compaints to madlinsen@gmail.com