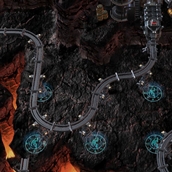 This system is essentially something that I created for a project of my own but that I felt I should share with everyone. The idea is to keep the "Train System" updated with whatever additions I come up with for my own map.

The current version is a vast improvement from the system shown in the video.
Changes since the video include:

Possible ideas for future versions include:

I've already included this in the map documentation and license, and for most people on this site it's a given, but, please credit The Hegemuffin if you release a map that uses this system. You are more than welcome to use or modify the system so long as you give credit where credit is due, (and I'd appreciate if you'd let me know as well, just so that I can see what people are doing with it).

Any feedback, suggestions, questions, or bug reports are welcomed (especially regarding the documentation, which may contain missing steps or annotations on how to implement the train. I recognize that many of you would be comfortable with my triggers regardless of any documentation, and probably capable of making something much better, but I wanted to create something that would be accessible even to someone unfamiliar with the Trigger Editor, let alone with Galaxy).