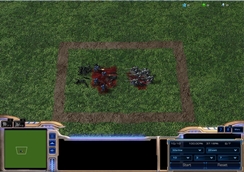 This is a tool I developed to help me balance units in a game I'm working on. I thought it might be of some use to a few other map makers so I decided to put it on Mapster. The tool spawns units of your choice and has them fight one another. Once the battle is over there are statistics that are generated about the fight, such as how many of each side died and what percentage of total health was lost in the battle.

Looking at the screenshot as you can see the top left 10/10 means 10 out of the 10 marines spawned in the simulation so far have been killed, the 100% means that 100% of the total health of the marines spawned thus far has been lost. The drop down box below it is the unit type selector for the left side, and the drop down box below that one is the number of marines to be spawned. The drop down to the right of that, the one in the center, is the number of times to run the simulation, you can see here its set to run 3 times before completing.

These stats are updated after each test run, in the screenshot only one test run has completed and as you can see the number of test runs is set to 3 so 2 more test runs will occur, including the one that is in progress in the screenshot. Running multiple test runs can be helpful, because you can get slightly different results each test run and the simulator, after it runs for example 3 test runs, it will average all of the test run stats together to get a more reliable set of results (I usually ran 10 test runs). The game speed is also increased during the test runs to make them go faster.

Directions for Setup and Use

To setup the simulation you must first go into the trigger editor, go to unit test initialization under the unit test simulator folder and fill in the unit types you want to have in the simulator as well as the names of these units, or you can just call them whatever you want. I have marines, marauders, and ghosts put in by default. If you want to move the tool to your map simply copy and paste the folders to your map and the simulator will still work, just remember to copy and paste the variables folder first, and then create the needed points and the needed region, then you can copy and paste the other trigger folder and everything should work just fine. Keep in mind the region must be big enough so that the units involved in the battle are always inside of the region, which is marked by the dirt outline in the screenshot.

The spacing and positioning of the points as i have them in my map is fine but you could set them however you want, so long as they are close enough that the units engage one another after spawning. Once your in game type test to bring up the simulator and close to close it. After you have opened the simulator pick the unit types you want as well as the number on each side and the number of tests to run. Once the tests have run to completion you can hit the reset button to clear the remaining units and then run the test, or just run another test and the left over units will be removed automatically. At the moment its set for there to be a max of 21 units in the simulator, if you want to add more you will have to modify a few things in the code.

If you have any questions feel free to send a pm.