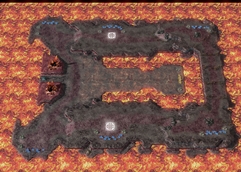 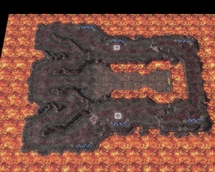 The map has a very short air distance between the bases, but a much longer rush distance by ground.. There's a natural close by, and a second natural behind some destructible rocks. However, between the two second naturals, is a hill with several LoS-blockers, so an enemy surprise attack from there could be very potent. At the 3 o'clock – middle-ish position is a very vulnerable rich mineral expansion. It can be sieged by tanks, but additional vision has to be provided for it to happen. The entire map is pathable and buildable, except for the ridges making up the maze between the naturals. These are unpathable, so reapers and colossi won't be able to walk over them.

The multiple lines of LoS-blockers makes surprise attacks on the highest ground possible and and a real pain the neck to spot before it's too late. There are lots of high ground advantages, so in this respect too, vision is an important thing. The two naturals are far apart, so it could lead to a certain amount of base trading. Finally, an attack on the rich mineral expansion, could be pinned between two enemy forces with no chance of retreat. However, only there's only 7 bases so you might find yourself in a situation where you're all mined out and the precious gold expansion is all that is left, or two broke armies have to micro it out for victory.