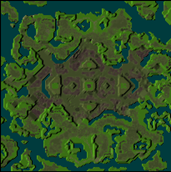 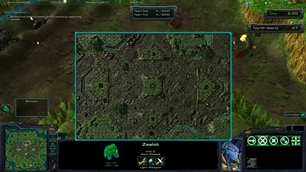 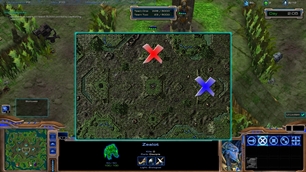 This map adds a twist to what players consider "Capture the Hill". Two teams of three players are stationed on opposite ends of the map and map battle amongst 5 islands in the center of the map for complete domination. This map was created for one purpose; create a new and exciting experience for the average StarCraft 2 player. Numerous hours have been devoted to creating a lush and realistic world in which the players must not only battle enemy encounters, but must also avoid and adapt to the wrath of mother nature.

There are two natural world elements that have been incorporated into this map. Flooding and a Day/Night Cycle

Throughout each match, players will be kept on their toes as randomly occurring floods that will cause players to seek higher ground before succumbing to mother nature's wrath. Each randomly occurring flood will provide a 15 second warning to attempt to get units to higher ground. The flood's duration can last anywhere from 20 to 45 seconds. Also, not only will your units slowly drown if left in the deep water, but their movement speed will be reduced to simulate real water impairment.

Also, during each match, you will witness realistic day and night transitions. Each phase of the day is 7 1/2 minutes in length. The purpose of this mechanism is to test the player's overall flexibility. This is achieved by only allowing units to use cloaking abilities in the shadows of the night. Being cause in the day light will reveal and prevent units from cloaking.

vTwMechlior – Assisting with Testing and debugging

Please be sure to let me know of any bugs and/or errors. Feel free to contact me via Real ID: "Zurom – 998"