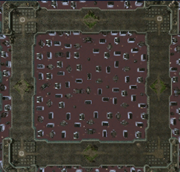 ATTENTION: Due to an error where we were not being registered as a new map, Warlords is now hosted on Battle.net as "Warlords: Battle for Captum" by my partner MrVanderCake

Warlords is a “wars” style game similar to Desert Strike, Colonial Line Wars, or Nexus Wars, but with a personality all its own.

Compete with 3 other warlords vying for control of the war torn planet of Captum. Build buildings and research technology to build up a respectable army while managing your economy and limited base space. Build up base defenses and don't let your wall fall! Destroy all enemy HQs to win!