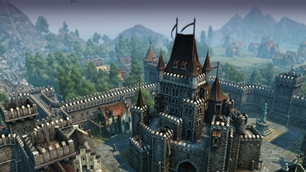 [WC3] Castle Fight is enhanced version of Castle Fight 1.14b from Warcraft 3. Below a list of features and differences between Warcraft 3 and Starcraft 2 versions:

In summary, this map is a hybrid of Nexus Wars and Castle Fight in terms of mechanics. New Castle Fight have a dynamic gameplay, more features and competitive factor with stats/ranking system.

Currently only 3 races are available(human, undead, orc). I plan to add new race each 3 days.

Map is published on all starcraft 2 servers with name [WC3] Castle Fight.

You can find additional information about map and development on official website http://sc2castle.com