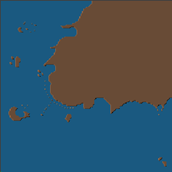 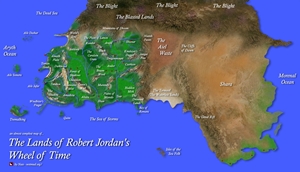 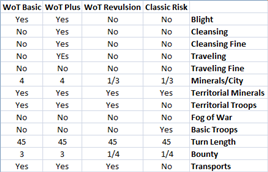 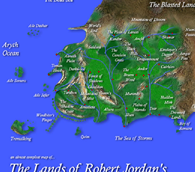 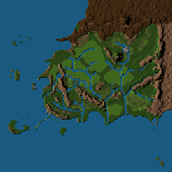 I'm putting the finishing touches on the terrain.

Essentially, this is a Risk map in a Wheel of Time setting. I will have the Westlands and the Blight.

The game mechanics will draw from CrazyRusski's (code 925) popular Risk Revulsion map. Probably the most notable difference will be the lack of naval combat. There will be only one naval unit: the transport. Transports will be armed, but only able to attack other transports. Archers will be able to attack transports, but will require significant time/numbers to destroy them. I am also trying to avoid the rock-paper-scissors nature of CrazyRusski's units (Marauders vs. Tanks, etc.). I essentially want any army of a given resource value to be able to hold its own against any other army of that resource value (assuming micro doesn't play a part, of course). This is simpler and truer to Risk. I'm not saying it's better. This will be most evident in the "Classic Risk" setting.

The map will consist of territories (Andor, Arad Doman, etc.). Each territory will consist of two or more cities. There will also be independent Stedding, which function as standalone cities and do not give any of the benefits of a full territory (though they still count towards the number of cities used to calculate a player's income).

General flow of the game is as follows:

Each city will consist of a stationary defending unit (Archer by default, changed with each conquest; I will attempt to make the game pick a ranged unit if available) and a structure. Structures recruit units and (optionally) switch out the defender unit. There are four types of structures:

In ocean and river-based cities.

In one city of each of the larger territories (Andor, Cairhien, etc.). I know this structure's recruitment strays from the books, but having each of the One Power units recruitable in only one city each would be retarded.

Optional. There will be a simple interface (probably a checkbox list of players) for choosing who you're currently allied to. If you've checked a player and he's checked you, your troops will not attack each other. If only one of you has checked the other, then both sides will still fight each other. There will (optionally) be the possibility of Allied Victory. Without Allied Victory, the game ends when one person controls the required percentage of the map. With Allied Victory enabled, the game ends when any group of players who are all allied with each other controls the required percentage of the map.

Resource trading will be allowed

Optional. There will be an interface to propose and accept city trades (e.g., I give you Smallville in exchange for Bigtown). There may also be an interface for trading whole territories (though this can be done through city trades, of course). I would highly recommend either removing all troops from relevant cities before trading or trading only with allies. Otherwise, you may immediately recapture a city and tick off your trading partner. It naturally follows that you should check for troops near the cities you're receiving before accepting if you're trading with a non-ally.

I may allow banning. Banning will occur by unanimous vote only (except the person being banned, of course). This will be most useful in getting rid of intermittent laggers. Players will not be able to ban the player who controls the most cities or who has the largest army (in terms of resource value)

These are all optional.

Along the northern edge of the map, a significant number of hostile (and fairly powerful) units known as Shadowspawn will roam about randomly and (possibly) attack on occasion (but only against the northernmost cities). When killed, they respawn at Shayol Ghul and resume their roaming. As long as a player controls one of these cities, they will receive some kind of TBD slight combat advantage. Taking these cities should be fairly easy, but expect to have to recapture them periodically.

The Asha'man (meaning Guardians) are poisoned by their own contaminated magic. Over time, they will slowly lose energy (which is used for nothing else). Once their energy reaches zero, they will be fully healed and become hostile to everyone (the healing is a one-time thing; hostile Guardians will not heal). They will no longer lose health and will roam the map much like the Shadowspawn do the Blight. If the Madness is enabled, Guardians will be very cheap (relative to their power) Pre-Cleansing and will be very expensive (due to their great attack power) Post-Cleansing. See Cleansing of Saidin.

This event goes hand-in-hand with the Saidin Madness. If the Madness is enabled, there will be a way for each player to vote to cleanse saidin (the source of the Guardians' power). If it is unanimous among players who control at least one city (and each player has the requisite number of minerals), each player will be fined (optionally) a mineral or two for each Guardian they control. From that point forward, Guardians will cease to go hostile (although those that are already hostile will remain so). Their price will also go up. Players may change their vote at any time prior to the Cleansing taking place. See Stedding

Like the Cleansing of Saidin, this ability will only be available upon unanimous vote by all city-owning players (at any point in the game). Once all players have voted "yes," transports will gain the ability to Travel through the Pattern. Basically this means they'll be able to Blink anywhere (in the water). Note that there will be a land route of some kind to every city. Transports are not required, but may be useful. Optionally, owners of Transports may be fined a mineral or two per Transport when voting consensus is reached. If this is the case, the ability will not become available until all Transport owners have the required minerals. Aes Sedai (remember: non-combat) will also gain the ability to Travel, but only a short distance. Guardians will not. Players will not be fined per Aes Sedai. Players may change their vote at any time prior to Traveling being enabled.

There will be a half-dozen or so cities scattered throughout the continent that are not a part of any territory. The advantage to owning these Stumps will be the ability to recruit powerful Ogier. But that is not all that makes Stumps unique. There will optionally be a significant area surrounding each (but not including any non-Stump cities) which negates the One Power. This means that Aes Sedai within this area will be unable to heal or Travel. Guardians within this area will not go mad (their energy will not change). I may also make it so that units within a stedding heal over time (though it will be far slower than a Aes Sedai's healing power; probably enough to fully heal a near-dead Archer in 2 minutes). The boundaries of stedding will be visible by terrain colors.

These are possible special locations with their own unique advantages and disadvantages. All will be optional.

The city of Far Madding, though a regular city, will have the area effects of a stedding, minus the healing factor.

Aes Sedai will automatically be healed at the same rate that they heal others when near Tar Valon. Guardians will do extra damage when used near the Black Tower.

There will be a few preset game types to vote on. Alternatively, players may vote for "Custom" and then vote for settings individually.