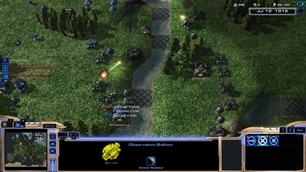 It's 1914, and Europe is about to be engulfed in total war. The Entente (Britain, France, Italy, Russia, and Serbia) faces off vs. the Central Powers (Austria, Bulgaria, Germany, Ottoman Empire) for domination. Pick one of the nine nations and help your team win the war!

Gameplay revolves around trench warfare. Trenches (1×1 bunkers) can be build very cheaply and allow your riflemen to defeat a significantly larger force trying to attack them. Once trench lines have sprung up along all the fronts, higher tech units like mortars, artillery, ships, and eventually tanks become important. Player get income depending on how many cities and towns they control. Some nations are much bigger than others, making for a very different playing experience. Some prefer the action packed nations like Germany or Russia, while others prefer the more slow paced Serbia or Bulgaria. Overall it's a team game, so even if you're getting pushed hard, stay in the fight for the sake of your allies. When in doubt, fall back and build another line of trenches!

The game is over when one team controls all 9 capitol cities.