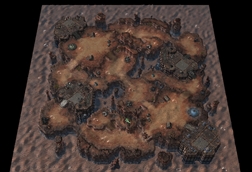 The Red and the Blue

The Red and the Blue is a Medium sized custom multi-player (1v1) map for StarCraft 2 and built with the included Galaxy Editor. It utilizes all the standard multi-player units and some of the units found in the campaign scenarios. This map is set on a Terran military research installation on a blasted rock in the middle of the desert wasteland of Mar Sara. Two factions, Dominion forces (the Red) and James Raynor's rebel marines and mercenaries (the Blue), are pitted against each other in a race to gain control over the installation's key facilities.

Each player is awarded points for controlling any of six "flagged" facilities at the installation; the Research Bases, the Special Ops facilities, and Mercenary Outposts. In addition to game points, when a player maintains control of one of these facilities, they are activated and provide support to that faction. For example, by gaining control of a Mercenary Outpost, the player will gain access to purchasing Mercenary units. Each player is awarded points for each "flag" facility that they manage to capture and successfully defend. No points are awarded for bases who's control is contested.

The standard game timer runs for 20 minutes. The player who has accumulated the most points by the end of the game timer is awarded the victory. Should both players be tied at the end of the game timer, the game goes into sudden death overtime, with the first player to gain a higher score being awarded the victory. In addition, should one player reach 1000 points before his opponent, that player will be granted a victory as well. Also note that if a player should manage to maintain ground unit control of their opponents base, they are granted a x10 multiplier to their capture points and a x2 multiplier to resources, and at the same time their opponents point gains and resources are nullified. Defend your bases well!

The Red and the Blue is currently in it's Beta testing phase. Please feel free to leave any comments or suggestions you may have. Thanks!